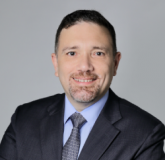 Member of the board of various technology start ups in the GCC and North America.

Engaged in the investment banking and financial transactions arena in the Middle East, Russia, Africa and other markets for a period of almost 20 years.

Worked for top tier investment banks such as Merrill Lynch and Salomon Smith Barney from 1997 to 2003.

Holds  Bachelor’s degree in Electrical Engineering from the American University of Beirut ( With Distinction) and an MBA from INSEAD in Fontainebleau, France.